Buh Bye Muammar. Don't let the door hit you in the ass on your way out! 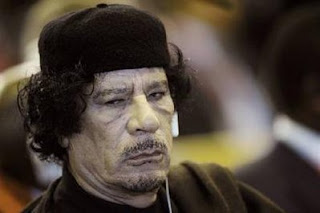 Hah!  I said this would happen yesterday.


Dictator on the run: Gaddafi may have fled Libya already and be on his way to Venezuela, says Foreign Secretary William Hague
By Daily Mail Reporter

The Foreign Secretary said he had seen 'information' that suggests Gaddafi is on his way to the South American country - as Libya was up in flames today with reports of around 400 dead.

The dictator was said to have fled as Tripoli descended into chaos after anti-government demonstrators breached the state television building and set government property alight.

Even Gaddafi's own Libyan diplomats at the UN are calling for him to step down. Deputy Ambassador Ibrahim Dabbashi said that if the dictator does not relinquish power, 'the Libyan people will get rid of him'.