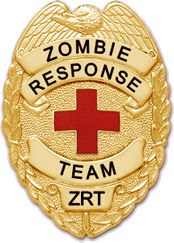 He needed the money to get vittles and stuff to prepare for the upcoming Zombie Apocalypse!

Authorities say they have apprehended a 33-year-old Florida man who they caught with $1500 in stolen cash, and a Zombie Response Badge.

Police reported a local man (name withheld pending charges) was arrested after robbing the 7-11 convenience store on Trimp street. The store owner, who was working the cash register late Tuesday evening, told reporters that the young man walked into his store around 10PM and began browsing through the aisles. After a few minutes he came to the register with several bottles of water to purchase. That's where everything took a turn for the worse. The man then pulled out a gun and demanded the store owner put all the cash he had in a bag along with the 3 bottles of water.

After escaping from the store without incident the owner contacted the police who immediately began looking for the thief. According to police reports the suspect was spotted walking several blocks away from the convenience store. Officer Mendez of the North Community Police Department drove ahead of the man and got out of his cruiser to question the thief. Upon identifying himself as a police officer the suspect stopped and told Officer Mendez that he also was an officer of the law.