Who's the Bullshitter Mr. President? 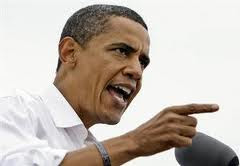 
He's a Bullshitter!
From Rolling Stone -

“Obama and the Road Ahead: The Rolling Stone Interview,” by Douglas Brinkley:

“We arrived at the Oval Office for our 45-minute interview … on the morning of October 11th. … As we left the Oval Office, executive editor Eric Bates told Obama that he had asked his six-year-old if there was anything she wanted him to say to the president. …

‘You know, kids have good instincts,’ Obama offered. ‘They look at the other guy and say, “Well, that’s a bullshitter, I can tell.”’”
Posted by Sam at 9:50 AM