To the New Dark Ages 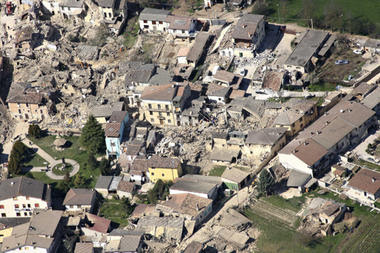 ARE YOU FRICKING KIDDING ME??!!

An Italian court sentenced scientists to jail time for not having a functioning crystal ball ahead of the 2009 earthquake in L'Aquila. The arguments of science and reason fell on deaf ears.

Today, a court in the central Italian city of L'Aquila, 380 years after that miscarriage of justice, sentenced six scientists and a government bureaucrat to six years in jail on manslaughter charges for their failure to predict a 2009 earthquake that left more than 300 people dead.

This headline isn't the sort of thing that's generally expected from Italy anymore. The church quietly abandoned its objections to heliocentrism in the early years of the 18th century, and by the early 19th, had fully accepted the scientific facts.

But according to the BBC, a modern Italian secular institution is now the one struggling to grapple with science. The seven convicted men stood accused of "inexact, incomplete, and contradictory" information about the risks posed by tremors in the weeks ahead of the April 6, 2009, earthquake that caused so much destruction.