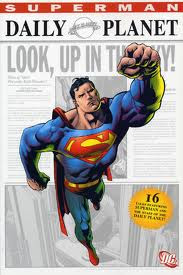 Will the Man of Steel be the new Man o' Law?

Even Clark Kent can see through the writing on the wall when it comes to the newspaper industry.

In the next issue of DC comics’ “Superman,” due out on Wednesday, the superhero’s alter ego will eschew being a mild-mannered reporter, presumably to become a snarky blogger, when he quits his post at the Daily Planet.

“This is really what happens when a 27-year-old guy is behind a desk and he has to take instruction from a larger conglomerate with concerns that aren’t really his own,” Superman writer Scott Lobdell said to USA Today