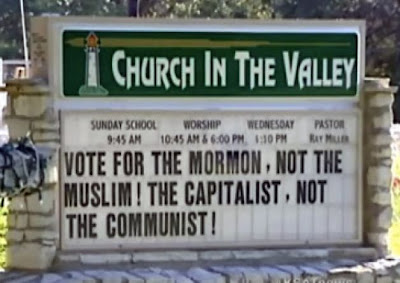 What a great town!

I have to stop there and get BBQ.

LEAKEY — When Ray Miller posted a marquee that read “Vote for the Mormon, Not the Muslim/The Capitalist, Not the Communist,” the local pastor added more fuel to the firestorm of political rhetoric burning from sea to shining sea.

National media outlets ran with the story. Online pundits pounced. And the Internal Revenue Service was asked to investigate whether the sign violates nonprofit laws.

Americans United for Separation of Church and State sent a formal complaint to the IRS, saying it had received more than two dozen emails criticizing the church for endorsing a candidate when federal and state nonprofit laws prohibit it.