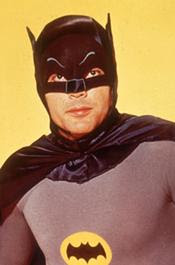 Heck he doesn't even look like Bruce Wayne either.

OCTOBER 3--A Michigan man who patrols the streets in a Batman costume is facing a felony charge after he allegedly interfered with a police investigation.

Mark Wayne Williams, 33, was busted after showing up at the site of an auto accident Saturday evening in Bear Creek Township in northern Michigan. Williams, dressed as Batman, was at the crash scene thanks to his monitoring of a police scanner.

Investigators were probing the personal injury accident since the driver responsible for the crash had fled the scene. In a bid to track the motorist, troopers enlisted the help of  a K-9 dog.