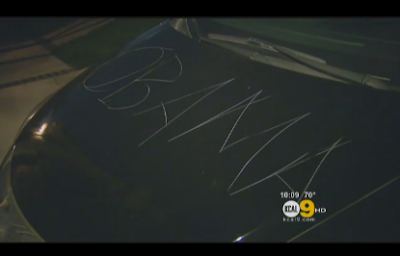 You don't like the fact that someone has Romney signs in their yard so you key the vehicles at the house only one one of them belongs to the family's daughter and her husband who are staying there, are both unemployed and who support President Obama.

ALTA LOMA (CBS) — A case of campaign vandalism is under investigation Friday in Alta Loma.

Someone keyed the word “Obama” into two cars and slashed seats in another outside a residence that had Mitt Romney campaign signs.

CBS2 and KCAL9 reporter Rob Schmitt spoke to Ken Slown, owner of one of the keyed vehicles.

He explained to Schmitt that he and his wife — both currently unemployed — are staying with her parents and it’s her parents who support Romney.