My two cents worth 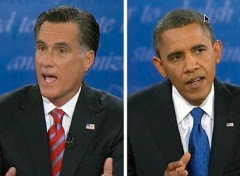 All Romney had to do last night was not look like a crazy neocon hawk.

I also believe he did a fine job tying foreign policy to the US economy as well.

The net result of all of the Summer's outpouring of Romney demonization, RDS (Romney Derangement Syndrome) and the 110 million spent on ads backfired bigtime.

The people saw the real Romney and they were re-assured he had no horns and wasn't the devil they were told he was.

UPDATE:  Hours after their third debate Obama finally realizes he needs a plan to show to the American people what he expects to do in the next four years (If we were stupid enough to re-elect him)