Cheese it; the cops! 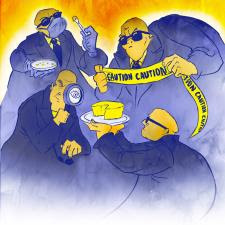 Probably the truck next to her contained a 1000 kilos of uncut cocaine, no doubt also with illegal immigrants aboard.

But they got the cheese!!


Woman busted at border with 92 pounds of cheese
Associated Press -

LAREDO, Texas (AP) — Usually when U.S. customs inspectors discover large loads hidden in vehicles at the Mexican border, it's cocaine or methamphetamine. This time it was more than 92 pounds of cheese, and not the heroin-based kind.

U.S. customs officials have fined a Laredo woman $464 for failing to declare 92.7 pounds of white Mexican cheese she had hidden under the seats of her minivan when returning from Mexico.

Customs and Border Protection officials say the 29-year-old woman's illicit load of dairy was discovered when customs officers referred her for a secondary inspection at the Gateway to the Americas Bridge on Saturday. The cheese was destroyed.