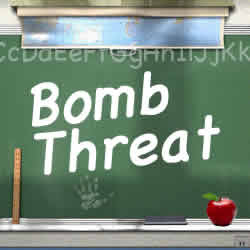 Obviously this child needs some sort of intervention in her life.

Calling in a bomb threat or was she calling out for help?

A 12-year-old girl has been arrested on a felony charge after police said she admitted calling in a bomb threat to her middle school.

The hotline is monitored by police, and Gonzalez said the call prompted authorities to conduct a sweep and clear the school.