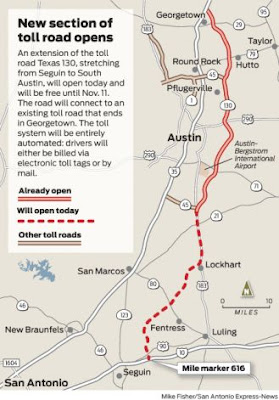 I just might pass on driving it this morning.  The only swine I want to encounter this morning on my trip to Denton is the Canadian Bacon in my Egg McMuffin.

Not on the hoof.

Victor Espana probably won't forget his first drive on the Texas 130 toll road, but not because of its much-talked-about 85-mph speed limit.

He's more likely to remember the two feral hogs he slammed into with his mom's Chrysler 300 as he sped along the road in the middle of the night.

The collision, which didn't injure Espana but left the two hogs DOA, means his first trip on the country's fastest road might be his last.