A Cosmic balancing of the books? 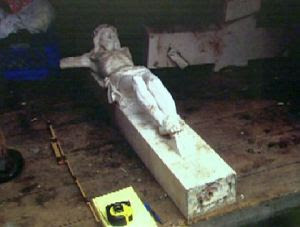 Don't piss HIM off.

Or is this just balancing the books?

It is ironic though.  Isn't it?

Pizza Parlor Worker Prayed Before Statue, Prior To Wife Being Cured Of Cancer

NEWBURGH, N.Y. (CBSNewYork) – David Jimenez believed his devotion to a crucifix was responsible for his wife being cured of cancer. Well, the crucifix fell on him, crushing one of his legs.

And as CBS 2’s John Slattery reported Friday, the leg had to be amputated.

Jimenez sees tragic irony in losing his leg to a crucifix he had prayed to. The crucifix had been outside the Church of St. Patrick in Newburgh. For months, the 45-year-old pizza worker would stop and pray at the crucifix, that his wife would be cured of ovarian cancer.