Pumpkin contest? It must be getting close to Halloween 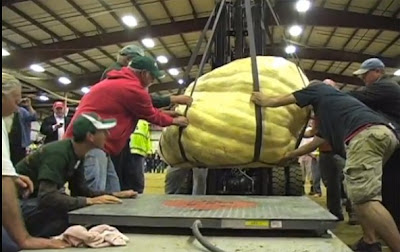 Jesus!  A pumpkin that weighs over 1 ton!!

What do they feed it?  Apparently anything it wants.

TOPSFIELD, Mass. (AP) — Organizers of a fair in northeastern Massachusetts claim a Rhode Island man has set a new world record with the first pumpkin ever to weigh more than a ton.

Leaders of the Topsfield Fair say the huge gourd grown by Ron Wallace of Greene, R.I., tipped the scales at 2,009 pounds on Friday, winning him $5,500 for first place and another $10,000 as a bonus for breaking the one-ton mark.

The Guinness World Record for heaviest pumpkin is 1,810.5 pounds set by Chris Stevens of New Richmond, Wis., at the Stillwater Harvest Fest in Stillwater, Minn., in October 2010.