Start rebuilding by getting rid of Tony Romo 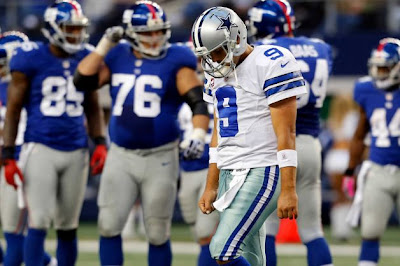 He's a never was and a never will be.

Then get rid of Dez Bryant.

Anyone else who doesn't take the game seriously and mugs, grins, and jives their ways through the game.

I'm over the Cowboys.

ARLINGTON — At first, they struggled, especially their quarterback. But by late afternoon, they had transformed themselves into never-say-die warriors.

Ultimately, though, the Dallas Cowboys reverted back to what they've been for so long during the Tony Romo era: the NFL's top tease.

And when it was over Sunday, with his team trying to pick up the pieces after a gut-wrenching 29-24 loss to the NFC East-leading New York Giants, team owner Jerry Jones put it all in perspective.