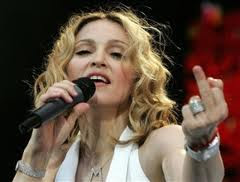 Golly if President Obama's lost Madonna fans in Los Angeles who does he have left?


NEW ORLEANS (AP) -- Madonna drew boos and triggered a walkout by several concertgoers after she touted President Barack Obama on her "MDNA Tour" in New Orleans.


The Material Girl asked during Saturday night's performance: "Who's registered to vote?" She added: "I
don't care who you vote for as long as you vote for Obama." Drawing boos in touting Obama over

Republican Mitt Romney, Madonna followed: "Seriously, I don't care who you vote for ... Do not take this privilege for granted. Go vote."

Madonna is often outspoken. Some Colorado fans, mindful of a mass shooting there, complained she used a fake gun to shoot a masked gunman in a recent concert act in Denver. A Madonna concert in Paris in July drew ire when a video showed a swastika on a politician's forehead.
Posted by Sam at 7:58 AM