WTH?? Its only soccer, folks 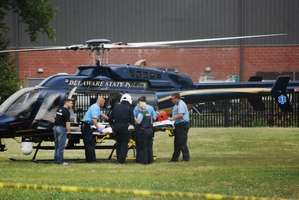 Wow, I didn't think folks here got all that wound up about Soccer at all.

One killed, four wounded in melee in Wilmington
DelawareOnline -

Wilmington police continue to investigate an afternoon shooting in Eden Park off New Castle Avenue that left one man dead and four others wounded.

The shooting spree at a soccer tournament at Eden Park in Wilmington has claimed the life of one of the suspected shooters, city police said.

Capt. Nancy Dietz said three men began firing into a crowd about 2:30 p.m. today while a soccer tournament was happening at the park. Three people were wounded, she said, and some people in the crowd returned fire - wounding two of the suspects.