Dave Thomas must be spinning in his grave 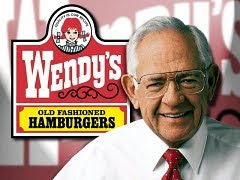 BTW that's Dave Thomas in the photo not the kiddie-porn dude.

Saying “Scooby Doo” at the drive-through window of a North Side Wendy's might have brought certain patrons something extra in their fries — a memory card with videos of child pornography.

Asking for “chiva” at an East Side restaurant, Anna's Café, wouldn't have brought out an order of goat meat, but an illicit delivery of heroin.

The off-the-menu items stood out Wednesday among the run-of-the-mill details in a docket of immigration violators, gun smugglers and drug peddlers in line for sentencing in front of U.S. District Judge Xavier Rodriguez.