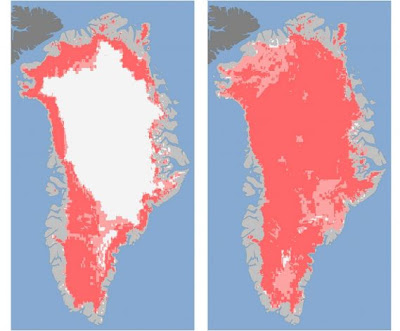 These undated handout images provided by NASA shows the extent of surface melt over Greenland’s ice sheet on July 8, left, and July 12, right. Measurements from three satellites showed that on July 8, about 40 percent of the ice sheet had undergone thawing at or near the surface. In just a few days, the melting had dramatically accelerated and an estimated 97 percent of the ice sheet surface had thawed by July 12. In the image, the areas classified as “probable melt” (light pink) correspond to those sites where at least one satellite detected surface melting. The areas classified as “melt” (dark pink) correspond to sites where two or three satellites detected surface melting. Nearly every part of the massive Greenland ice sheet suddenly and strangely melted a bit this month in a freak event that concerned scientists had never witnessed before. NASA says three different satellites saw what it calls unprecedented melting from July 8 to July 12. Most of the thick ice remains, but what was unusual was the widespread area where some melting occurred. (AP Photo/Nicolo E. DiGirolamo, SSAI/NASA GSFC, and Jesse Allen, NASA Earth Observatory Photo: AP / AP

The rest of the story: Maybe you should look at a correlation between this and the massive solar flare from the sun at around the same time?

Just a suggestion to look at that possibility while you continue on with President Obama's directive that NASA continue its Muslim outreach program.

Or it could be from all of the hot air from his campaign .

Even Greenland's coldest and highest place, Summit station, showed melting. Ice core records show that last happened in 1889 and occurs about once every 150 years.

Three satellites show what NASA calls unprecedented melting of the ice sheet that blankets the island, starting on July 8 and lasting four days. Most of the thick ice remains. While some ice usually melts during the summer, what was unusual was that the melting happened in a flash and over a widespread area.