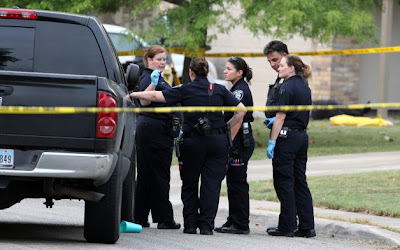 From the article it sounds like some investigation work is warranted, if for nothing else but to sure that this was 'righteous' shooting by the officer.

If not then other steps will need to be taken.

A San Antonio undercover police officer, responding to a personal request for help from a female friend, shot and killed the woman's ex-boyfriend who had fired on them early Friday, wounding her, police said.

The officer, Michael Garza, 33, a 10-year veteran who has been involved in several on-duty shootings, was unhurt. An investigation is pending.

The suspect, Alfredo Hector Aragon, 35, died just after 3 a.m. in front of his Northwest Side home after Garza pursued him in an unmarked police truck with Aragon's ex-girlfriend, Abigail Jean Hernandez, in the passenger seat.