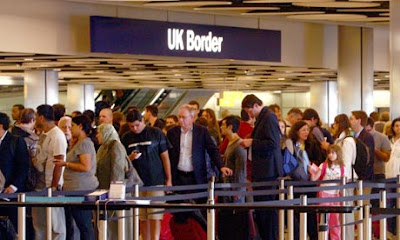 This is not very reassuring is it?

Terror suspects on the Home Office watch list are entering the UK in the runup to the Olympics without the necessary security checks, according to frontline officials at Heathrow.

One senior border officer told the Observer that inexperienced new recruits, deployed to shorten queues after complaints over lengthy waiting times, are repeatedly "missing" passengers of interest who should be referred to counterterrorism officers when they reach passport control.

The official said he was personally aware that three terror suspects – all of whose names are registered on the Home Office suspect index system – had been waved through by staff on his shifts since the start of July. Border officials should immediately notify counterterrorism police or MI5 if they suspect that "SX travellers" are attempting to enter the UK. Another colleague alleged that five suspects were "missed" in one day earlier this month.