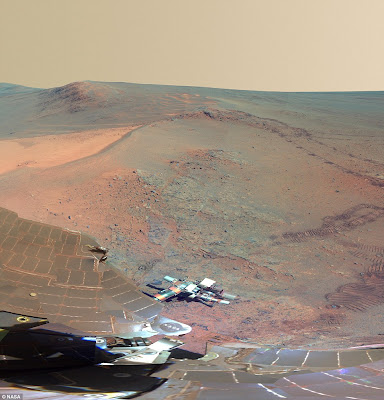 This is an absolutely marvelous photograph!

Or should I say Marsvelous?

I am sure some environmental extremist wacko group will complain about the Rover leaving tracks on the pristine surface of mars.


'The next best thing to being there': NASA releases the most spectacular picture of Mars ever taken... in all its 360-degree glory
By Eddie Wrenn - MailOnline

We might not be able to get there yet, but as NASA says, 'this is the next best thing'.

From fresh rover tracks to an impact crater blasted billions of years ago, a newly completed view from the panoramic camera on NASA's Mars Exploration Rover Opportunity shows the ruddy terrain where the voyaging robot spent the Martian winter.

This scene, recorded from the mast-mounted color camera includes the rover's own solar arrays and deck in the foreground, provides a sense of sitting on top of the rover and taking in the view.