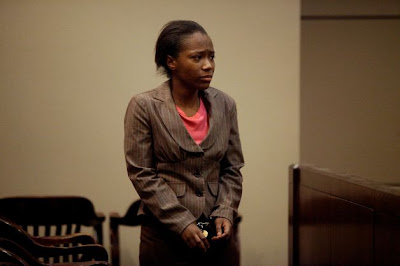 I believe I predicted prison time yesterday because I suspected a compromised verdict on the lesser included offense of manslaughter.

Nine years isn't that long in the scheme of her life and Mr. Wolford is dead.


Jurors handed down a sentence of nine years in prison Friday for Tiffany James, the young mother who fatally stabbed her baby's father with a kitchen knife.

James, 20, was found guilty of manslaughter Thursday, avoiding a murder conviction and the potential for life in prison. She must serve at least half of her sentence before she is eligible for parole. She could have received up to 20 years.

By all accounts a promising student and dedicated mother, James had her life ahead of her on the afternoon of Nov. 20, 2009 when she killed Antwan Wolford, her live-in boyfriend.