Go on, get him outta here 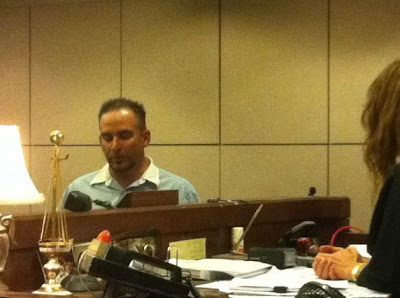 Look at what he said; "I didn't think I made a bad choice"

What?  To drive drunk or to try to answer your cellphone while you were driving drunk?

So you killed a person, and you still don't think you made a bad choice?  Are you fricking kidding me?!!

Thank you Judge Vasquez-Gardner in making a finding that the SUV he was driving was a deadly weapon.  This will keep him from getting paroled before serving at least half his sentence.

An ex-con who caused a fatal wreck two years ago while attempting to answer his cellphone as he drove home drunk from a strip club was sentenced Monday to 15 years in prison.

Rene Cavazos, 33, agreed to the prison term last month but asked on Monday that his SUV not be deemed a deadly weapon. State District Judge Juanita Vasquez-Garner denied the request, meaning that Cavazos will have to serve at least half of the sentence before he can apply for parole.

“It's going to be difficult for me to live knowing the hurt I've caused,” Cavazos said as he addressed the judge and the family of Julian Hernandez Jr. “I know it would be hard to forgive me, but I hope one day they see I wasn't out there in a drunken stupor. I didn't think I made a bad choice ... I felt OK.”