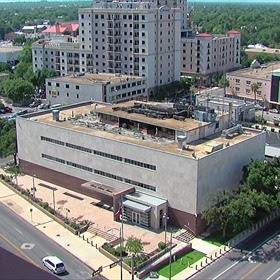 I am curious as to how Bexar County can claim eminent domain over a Federal Building.

I imagine they could do so to any private person/entity who buys the building from the Feds.  That of course would shoo away the private sector from considering a purchase of the facility.

So, that leaves Bexar County as the only viable purchaser.

Bexar County has offered the U.S. Federal Reserve $5 million for its building near the Bexar County Courthouse downtown, and failing that, has put the option of declaring eminent domain on the table.

According to a letter to the Fed from District Attorney Susan Reed, the county began negotiating to buy the building in May 2011, after the Fed announced that it was consolidating its operations in San Antonio and no longer needed it.

Bexar County spokeswoman Laura Jesse said that talks that might have led to a sale ended in May this year without explanation and the next month the Fed put the building up for sale.