Its okay she says it's just a misdemeanor! 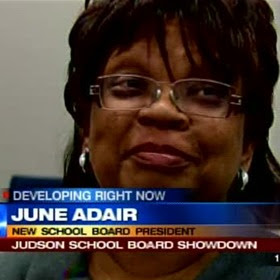 Yes they're just misdemeanors but you ran a campaign falsely, or failed to report contributions.  It also alleges you did so knowingly or intentionally.

If convicted it means you willfully committed campaign fraud.

Nice.  And you run the Judson school board.  Are you saying you did it but either you could care less or are you  telling us to go to hell?

Or are you saying big deal I broke the law but its only a misdemeanor, so eff off?

“It's still a misdemeanor. I won't be stepping down,” Adair said Monday. “I'll still continue to do my job: trying to make decisions that are good for Judson, the district, our kids and education. Nothing has changed.”