Statue of disgraced coach taken down 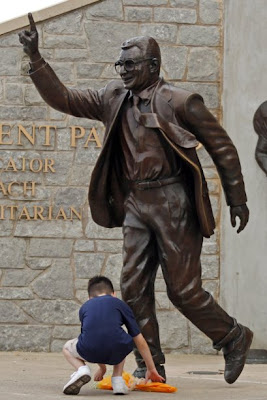 You may disagree with me.

But to turn a blind eye to the sexual abuse of many young boys in order to protect your football program is, IMHO, disgraceful.

The Joe Paterno statue was removed Sunday morning from its pedestal outside Beaver Stadium, and it will be stored in an unnamed "secure location," Penn State president Rodney Erickson announced. Erickson also said the Paterno name will remain on the university's library.

Shortly before dawn in State College, Pa., a work crew installed chain-link fences to barricade access to Porter Road outside Beaver Stadium and covered the fence with a blue tarp.

The work crew then removed the 7-foot, 900-pound bronze statue by forklift and placed it into the lower level of the stadium. Erickson released his highly sensitive decision to the public at 7 a.m. ET Sunday.