Do you feel lucky punk? Well do you? 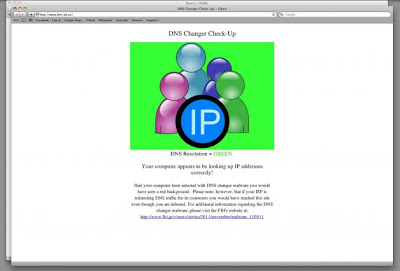 Are you infected?  Well are you?

Go to this link and find out.


Malware may knock thousands off Internet on Monday
Associated Press -

WASHINGTON (AP) — The warnings about the Internet problem have been splashed across Facebook and Google. Internet service providers have sent notices, and the FBI set up a special website.

But tens of thousands of Americans may still lose their Internet service Monday unless they do a quick check of their computers for malware that could have taken over their machines more than a year ago.

Despite repeated alerts, the number of computers that probably are infected is more than 277,000 worldwide, down from about 360,000 in April. Of those still infected, the FBI believes that about 64,000 are in the United States.