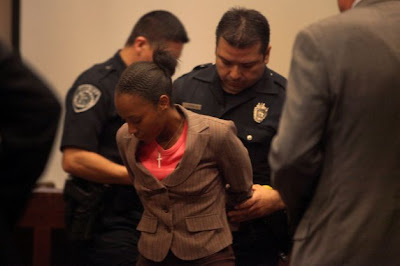 The 'Battered Woman syndrome' defense may have helped in reducing this from murder to manslaughter.

We will see what the jury does at sentencing.

My prediction?  Prison time instead of probation because the jury may have compromised on the guilty verdict; i.e. we'll agree to manslaughter but no probation.

Defense attorneys said she was a “hero” who represented battered women everywhere, while prosecutors said she was a murderer. But after nearly nine hours of deliberation Thursday, jurors chose neither label for Tiffany James, instead finding the teen-mom murder defendant guilty of manslaughter.

James, who was led out of the courtroom in handcuffs shortly after the verdict was read, now faces up to 20 years in prison instead of up to life for the November 2009 stabbing death of boyfriend Antwan Wolford, 18, at the East Side apartment they shared with her mother.

Jurors will return to 399th state District Court this morning as the punishment phase of her trial begins. Because of the lesser conviction, she is eligible to ask the 10-woman, two-man jury for probation.