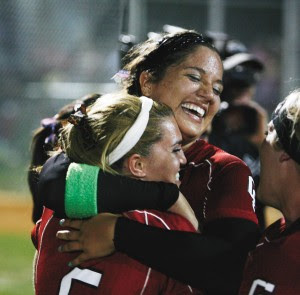 Congratulations to the Canyon HS Cougarettes!


Headed for Austin
By Chris Hoffman The Herald-Zeitung

Punch those tickets to Austin because the Canyon Cougarettes are headed back.

The defending 4A state champions proved to still have enough championship blood running through their collective veins, as the Cougarettes battled back from a Game 2 loss to streak past Corpus Christi Moody 3-1 to win the Region IV-4A championship series and earned the right to defend its state championship in Austin next week.

“This feeling is awesome,” Canyon’s Sara Mireles said. “I feel like we won state already. I’m so glad we’re going back, but we’re not finished yet. We’ve still go two games to go.

“It was a tough loss (in Game 2), but we went into the locker room to refocus and came out rejuvenated.”
Canyon will play Midway, who swept Frisco Wakeland on Saturday, in the UIL 4A state championship tournament at McCombs Field on Friday.

Time is to be determined.

Canyon coach Kevin Randle could hide his smiles after the final out and celebrated with his team, but told them that their journey isn’t over.

“I told the girls that we’re not done. We still have two more games,” Randle said. “I give Moody all the credit.
They are a great softball team. They had a ton of pitching and hitters all the way down the lineup. They gave us everything we could handle and more.”

After losing Game 2, the Cougarettes came out ready to let their bats do the talking, as they scored two runs on two hits in the first inning for a 2-0 advantage.

After Brittany Gomez was called out at second after trying to stretch a single into a double, Becca Wall reached on a Moody fielding error and senior catcher Mandy Ogle single into right.

Stephanie Peace smashed a double off the center field wall to score Wall and Sarah Crockett’s sacrifice fly to left drove in Ogle for the two-run lead.

Moody got one of those runs back in the bottom of the first when Jessica Mendez hit an RBI groundout with two on, but Wall snagged an easy grounder for the force at third to end the inning.

Mireles, who gave up just five hits and one run, while striking out four, was in command from the first, as she gave up just four hits and five base runners from that point on.

The only trouble the junior hurler would face from Moody was in the sixth when Mendez hit a leadoff triple, but Mireles forced a pop-up and struck out the next two to end the inning.

Peace’s double in the fifth drove in an insurance run for the margin of victory.

Mireles took care of the Moody hitters in the seventh, as she forced a grounder, a shallow flyout and Aby
Kester pulled in a shallow pop-up for the final out and the celebration began.

“This is awesome, but I couldn’t overestimate that it isn’t over,” Randle said. “We still have a week to go. We have another week of work and preparation that will challenge us. But this is still a special feeling to go to state two years in a row.

“We’re going to be ready.

The seniors had a busy day, as they attended graduation in the morning and came out ready to play against the Lady Trojans in the regional finals, but hit a speed bump on the way to Austin.

The Lady Trojans took advantage of some cold bats from the Cougarettes in a 3-0 loss that saw Canyon shutout for the first time this season, Mireles gave up her first home run — a two-run shot by Mariena Gallardo in the sixth — and Canyon’s first loss since March 5.

The loss didn’t sit well with the team, as they secluded themselves in their locker room.

“When we lost (Game 2), that really brought back every feeling we didn’t like,” Ogle said. “We didn’t want to make Thursday our last practice ever, so we came out and left it all on the field.

“It is indescribable when talking about going to state a second straight year. And being a senior, which makes it even more special. I want to go out strong.”
Posted by Sam at 2:11 PM