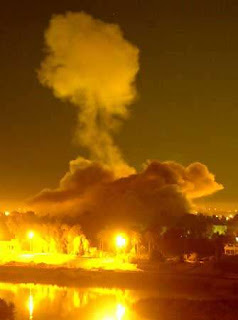 An early Mother's Day present to his ex-wife?

COLLEYVILLE, Texas — Police and federal agents have arrested a man they suspect of leaving an incendiary device on the front doorstep of his ex-wife's suburban Fort Worth home.

Tom Crowley, spokesman for the U.S. Bureau of Alcohol, Tobacco, Firearms and Explosives, says the man is in the Tarrant County Jail in Fort Worth and will be formally charged Thursday.

Colleyville police spokesman Raymon Cannon says the man was arrested Wednesday morning during a search of his north Fort Worth residence.

His ex-wife called police Sunday after becoming suspicious as she opened a package she found in a box in front of her Colleyville home. Police won't specify its contents, but Cannon says it was designed to burn rather than explode.

Colleyville is 15 miles northeast of Fort Worth.
Posted by Sam at 8:05 AM