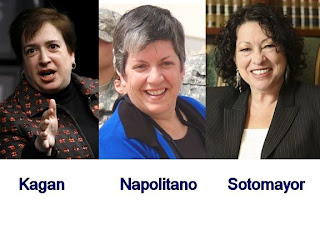 Apparently this is a done deal for his nomination.

There is a paucity of legal writings and she will draw fire from both the Left and Right.

The Left may be concerned over her tenure as Dean of the Harvard Law School when she apparently did not do much to help diversify the faculty of the school.

The Right?  Because no matter what they say about her banning the military from recruiting at the Law School over the "Don't ask, don't tell" policy it boils down to the fact that Obama nominated her.

BTW, is it me or does she have a passing resemblance to both Sonia Sotomayor and Janet Napolitano at least in overall physical morphology?  Yes, I know its shallow but I was just wondering.

AP source: Elena Kagan picked for Supreme Court
By BEN FELLER
Associated Press Writer
WASHINGTON (AP) -- Solicitor General Elena Kagan will be nominated Monday to the Supreme Court by President Barack Obama, a person familiar with the president's thinking says, positioning the high court to have three women justices for the first time.
Obama plans to announce his choice at 10 a.m. in the East Room of the White House. The source spoke on condition of anonymity because the decision, which came after a month-long search, had not been made public.
Kagan is known as sharp and politically savvy and has enjoyed a blazing legal career. She was the first female dean of Harvard Law School, first woman to serve as the top Supreme Court lawyer for any administration, and now first in Obama's mind to succeed legendary liberal Justice John Paul Stevens.
The rest of the story:
Posted by Sam at 6:59 AM