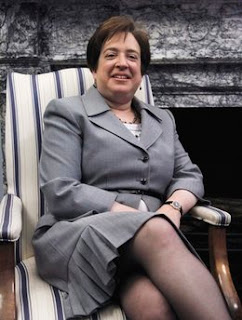 Why?  Because I am sure that Nancy Pelosi or Harry Reid will say something to the effect that we'll just have to appoint Ms. Kagan to SCOTUS and then we can find out what she is all about.

I have nothing against Elena Kagan I just want there to be the opportunity to do a full and fair vetting of her nomination.

Why is everything in such a rush with this administration?

It comes across like a snake-oil salesman trying to close the deal before the rubes discover they've been hood-winked.

Senate panel asks Clinton library to turn over documents on Elena Kagan
The Judiciary Committee asks for letters, memos, e-mails and more, before hearings on the Supreme Court nominee begin June 28. A library official says meeting the deadline would be 'very difficult.'

Reporting from Washington
The Senate Judiciary Committee on Wednesday set June 28 as the start date for hearings on Supreme Court nominee Elena Kagan, and asked the Clinton presidential library to turn over voluminous documents related to Kagan's time as a top presidential assistant in the 1990s.

But Terri Garner, director of the William J. Clinton Presidential Library and Museum, said in an interview Wednesday that it would be "very difficult" for her facility to meet the deadline. She said the records request is overly broad and "too general in scope" and that, under the Presidential Records Act, attorneys for both Clinton and President Obama have the right to read and review each document before it is released to the committee.