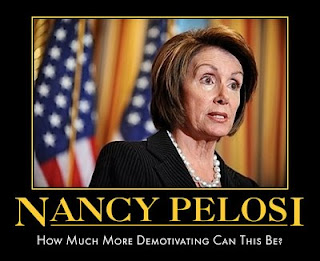 For a president that the Dems said couldn't do anything he sure did a lot.

Also, I thought President Obama took responsibility for this and under his Administration, BP got variances and the drilling permits.

So what's the deal?


Speaker of the House Nancy Pelosi, D-Calif., blamed the Bush administration for any lack of oversight leading up to the Gulf oil spill. The Obama administration, on the other hand, is blameless.
From Talk Radio News Service:


“Many of the people appointed in the Bush administration are still burrowed in the agencies that are supposed to oversee the [oil] industry,” Pelosi said when asked if Democrats could have prevented or mitigated the crisis by keeping a closer watch on the industry.

Added the Speaker, “the cozy relationships between the Bush administration’s agency leadership and the industry is clear…I’ve heard no complaints from my members about the way the president has handled it,” Pelosi stated.

On Friday, the Washington Examiner requested that Speaker Pelosi’s office release the list of Bush appointees to whom she was referring. We’ll let you know when we hear back.