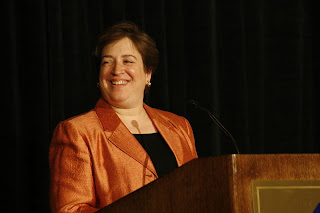 I don't think she is Harriet Miers but I do think there are issues concerning her qualifications.

I still have a problem with her not having any judicial experience and such a thin record.


The Next Harriet Miers?
by Paul Campos Info - The daily beast
Top Supreme Court contender Elena Kagan, is an able administrator with a shamefully thin record of legal scholarship. Paul Campos compares her to the hapless Bush nominee who got laughed out of town.

As the rumblings become louder that President Obama is going to choose U.S. Solicitor General Elena Kagan as our next Supreme Court justice, somebody needs to ask a rather impolitic question: How, precisely, is Kagan's prospective nomination different from George W. Bush's ill-fated attempt to put Harriet Miers on the nation's highest court?

On its face, the question seems absurd. Five years ago, Miers was derided as a careerist mediocrity whose primary qualification to be on the Supreme Court was a slavish devotion to President Bush. Kagan, by contrast is a purportedly "brilliant" legal scholar who was granted tenure at the University of Chicago and Harvard, before becoming dean of the latter's law school.

Kagan's work reminded me of Orwell's observation that, if book reviewers were honest, 19 of 20 reviews would consist of the sentence, "this book inspires in me no thoughts whatever."
• Read Our Full Coverage of Elena Kagan

Yesterday, I read everything Elena Kagan has ever published. It didn't take long: In the nearly 20 years since Kagan became a law professor, she's published very little academic scholarship—three law review articles, along with a couple of shorter essays and two brief book reviews. Somehow, Kagan got tenure at Chicago in 1995 on the basis of a single article in The Supreme Court Review—a scholarly journal edited by Chicago's own faculty—and a short essay in the school's law review. She then worked in the Clinton administration for several years before joining Harvard as a visiting professor of law in 1999. While there she published two articles, but since receiving tenure from Harvard in 2001 (and becoming dean of the law school in 2003) she has published nothing. (While it's true law school deans often do little scholarly writing during their terms,

Kagan is remarkable both for how little she did in the dozen years prior to becoming Harvard's dean, and for never having written anything intended for a more general audience, either before or after taking that position.)
Kagan's handful of publications touch on topics like regulating offensive speech, analyzing legislative motivations for speech regulations, and evaluating the process of administrative law-making. But on the vast majority of issues before the court,

Kagan has no stated opinion. Her scholarship provides no clues regarding how she would rule on such crucial contemporary issues as the scope of the president's power in wartime, the legality of torture, or the ability of Congress to rein in campaign spending by corporations. (Of course cynics have noted that today Supreme Court nominees are often better off not having an extensive "paper trail" regarding their views on controversial legal issues. Who would have guessed it would be possible to retain this virtue while obtaining tenure at two of the nation's top law schools?)

At least in theory Kagan could compensate somewhat for the slenderness of her academic resume through the quality of her work. But if Kagan is a brilliant legal scholar, the evidence must be lurking somewhere other than in her publications. Kagan's scholarly writings are lifeless, dull, and eminently forgettable. They are, on the whole, cautious academic exercises in the sort of banal on-the-other-handing whose prime virtue is that it's unlikely to offend anyone in a position of power.

Take, for example, Kagan's article, "Presidential Administration," which appeared in the Harvard Law Review in 2001. The piece is dedicated largely to reviewing the extant literature on the power of Congress and the president to control the actions of administrative agencies. Kagan's thesis consists of presenting a fairly standard view within administrative law scholarship—that relatively tight presidential oversight of administrative agencies can have beneficial regulatory effects—as if it were a novel argument. She maintains, on the basis of thin evidence, that such oversight increased significantly under the Reagan and Clinton presidencies, and concludes with the tautological insight that presidential oversight can be a good thing if it doesn't go too far.

Kagan's work reminded me of Orwell's observation that, if book reviewers were honest, 19 of 20 reviews would consist of the sentence, "this book inspires in me no thoughts whatever." The bottom line regarding Kagan's scholarly career is that there's no there there. This is a problem not only because we have no evidence regarding what her views might be on almost any important legal question, but also because Kagan's supposed academic achievements are being touted as the primary justification for putting someone who has never been a judge on the nation's highest court. Now the fact that Kagan is more or less an academic nonentity would be of merely academic interest if she possessed unrelated but compelling qualifications for ascending to the nation's highest court. But what else, exactly, has she done?

Besides her law-school career, Kagan's resume consists of four years in the Clinton White House, where she was associate White House counsel—a full rung down from Harriet Miers' position in the Bush White House—and deputy director of the Domestic Policy Council, and six years as the dean of Harvard's law school. (Last year, Obama chose her as his solicitor general.)

Apparently her main accomplishment as dean at Harvard was raising a lot of money, which, given that it's the Harvard Law School, sounds roughly as impressive as managing to sell a lot of pot at a Grateful Dead concert. (She's also been given credit for improving the collegial atmosphere at the school, aka, getting a bunch of egomaniacs to engage in less backstabbing, which anyone familiar with law school faculties can attest is not a negligible accomplishment. Whether it's a sufficient basis for putting somebody on the Supreme Court is another matter.)

It seems clear Kagan is a bright person and an able administrator. But Harriet Miers was those things as well: She had a long and successful career in the private practice of law, she was the first woman president of the Texas Bar Association, and she was the top lawyer in the White House for several years prior to her nomination to the Court.

Miers' nomination was derailed by two complaints: that her primary qualification was that she was a "crony" of the president, and that nobody knew what views she had, if any, on the vast majority of questions facing the Supreme Court. Both criticisms are just as relevant to Kagan's potential selection.

Consider that Obama and Kagan joined the Chicago law faculty in the very same year, after both were Harvard Law students and members of the Harvard Law Review. (The difference between a "crony" and a "colleague" is often something of a sociological mystery.) Indeed, the most impressive thing about Kagan is that she seems to have a remarkable ability to ingratiate herself with influential people across the ideological spectrum.

The second criticism of the Miers nomination applies with even greater force to Kagan. As a private lawyer, Miers, after all, had a fairly good excuse for having no public views on the great legal issues of our day. For most of the past 20 years, Kagan's job has been to both develop and publicize such views. That she has nevertheless managed to almost completely avoid doing so is rather extraordinary.
Posted by Sam at 8:35 AM