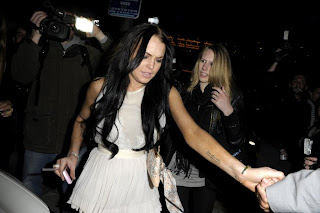 You are an idiot aren't you?

LOS ANGELES – An attorney for Lindsay Lohan says the actress will miss a mandatory court appearance Thursday because she is stuck in France.

Attorney Shawn Chapman Holley says Lohan's passport was stolen while she was at the Cannes Film Festival. Holley told ABC7 that Lohan has an appointment Thursday at the American embassy to have the passport replaced.

Holley did not respond to telephone and e-mail messages left by The Associated Press Wednesday.

Lohan's attorney said the actress was in France and would return to Los Angeles on Friday.

If Lohan makes bail, she will be prohibited from drinking alcohol, be required to wear an alcohol-monitoring bracelet and submit to random weekly drug testing.
Posted by Sam at 1:12 PM