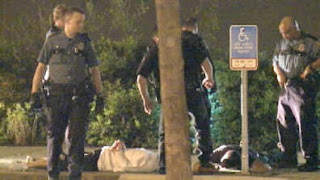 This is despicable behavior by the two officers and needs to be investigated and the officers discharged and possibly prosecuted as well if warranted.

I did not see any justification on the video for the reactions by the officers.

SEATTLE -- City leaders expressed shock and disappointment Friday at video that first aired on KIRO 7 Eyewitness News showing two Seattle police officers kicking a man as he lay on the ground. The man was detained during a robbery investigation last month.

The two officers have been reassigned as police conduct an investigation amid a firestorm of reaction.The racially charged videotape shows officers stomping on the innocent detainee after they responded to several 911 calls for a report of an armed robbery in the parking lot of a night club near Lake Union.

In the video, a male officer is seen kicking the man who had been ordered to the ground while threatening him with racial slurs. Shortly after, a female officer kicked the man in the back of his leg.