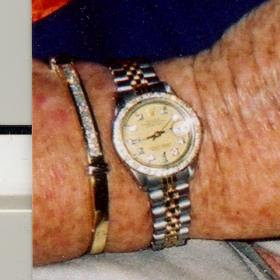 Its not necessarily the TSA agent or agents which did this.  I've had other folks pick up my computer when I'm being checked because my artificial knee always rings.

Imagine being ordered by airport security workers to put your very expensive watch on a scanning belt, over your objections. Then imagine going to retrieve it and it’s gone.

A Baker County woman says that experience at Norfolk International Airport in Virginia last year  cost her a $24,000 Rolex her husband saved up to buy her on her 50th birthday.

Now she’s suing the U.S. Transportation Security Administration after the agency rejected her claim letter and her congressman unsuccessfully attempted to intervene.

The lawsuit, filed in Jacksonville federal court this month, accuses TSA of negligence and bailment,  a legal term that makes someone holding another’s property responsible if it is lost.

“Basically they called me a liar. They treated me like crap,”  said Paulene Showalter,  63, of Glen St. Mary. Showalter is secretary to Duval County Public Defender Matthew Shirk.

TSA spokeswoman Lauren Gaches  said Friday  the agency couldn’t comment on a specific case in litigation. She said about 2.5 million pieces of luggage pass through screening daily at U.S. airports, and missing property reports total about 45 a day, less than a hundredth of 1 percent.

In a November letter denying Showalter, TSA’s claims office in Virginia said there were “no legally sustainable grounds” for a finding of liability against the agency.

Showalter’s attorney, Howard Coker,  said TSA contends Showalter never had a Rolex on her wrist that day, something she vehemently denies. Security cameras apparently weren’t working, according to Showalter and TSA’s response to inquiries by U.S. Rep. Ander Crenshaw, R-Fla.

“We have eyewitnesses who say she did have this type of watch, including one who saw it on the day in question,” Coker said.

Showalter said she was preparing to board a return flight to Jacksonville last February  when she was ordered by security officers to put her watch in a bin and place it on a conveyor belt. She said she objected several times but was told she had no choice if she wanted to board her flight, so eventually she complied.

When she was put through an additional security check, she again asked to be allowed to retrieve her watch first. Again, the answer was no, she said.

When she finally returned to the conveyor belt, the Rolex was gone.

“She did everything that they asked her to do. She wasn’t belligerent in any way,” Coker said. “All she wanted to do was get her property before they took her through the scanner.”

In its response to Crenshaw, TSA said passengers can choose to wear jewelry through the walk-through metal detector or can retrieve it immediately after exiting the X-ray. If it requires additional screening, it is inspected in view of the owner, the agency said.

If the passenger receives secondary screening, as Showalter did, TSA policy doesn’t require property be brought to them if they can see it, the agency told Crenshaw.

Showalter said she became hysterical after realizing the watch was gone. She called Shirk for advice. She asked for police to be called, but security officers told her she was disrupting the area and had to leave.

Eventually police were called after she ran into a lawyer co-worker at the airport, she said.

Coker said Showalter did everything she could to resolve the matter through non-legal channels. He said the lawsuit was filed before the statute of limitations ran out last week to preserve her claim.

He said if the statements made to Crenshaw are true, then TSA violated its own policies.

“They have a duty to be certain that all items are to be returned to the traveler,” Coker said. “They can’t abdicate that duty.
Posted by Sam at 3:52 PM