It certainly rocks some folks' worlds 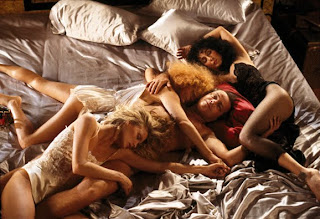 Had I known this I would have done my Geology Masters degree work on earthquakes instead of sedimentology.

Iranian cleric defends earthquake-promiscuity link
By ALI AKBAR DAREINI
Associated Press Writer
TEHRAN, Iran (AP) - A prominent hard-line Iranian cleric who said promiscuity and immodest dress cause earthquakes says God may be holding off on natural disasters in the West in order to let people sin more and consign themselves to hell.

Kazem Sedighi sparked widespread derision with his pronouncements in a prayer sermon last month linking earthquakes with women's dress. In a new sermon Friday, he has defended and elaborated on his claim.
Sedighi notes that some might ask why there aren't more earthquakes and storms striking Western nations that are "up to their necks" in immorality.

He says the answer is that God allows some of those who "provoke His wrath" to continue sinning "so that they (eventually) go to the bottom of Hell."
Posted by Sam at 9:23 PM