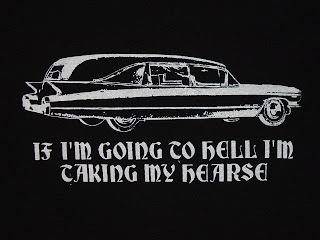 Have things have finally come to this?


Thieves steal hearse and dump dead body
Thieves in Ohio stole a hearse from a crematorium, with a dead body still inside it - then dumped the corpse and left a note telling the police where to find it.
metro.co.uk

The note, left in the abandoned hearse, said that the body could be picked up from a certain intersection. Police subsequently found the corpse, undamaged in a bag on a gurney, exactly where the note said it would be.

The Greenfield Crematory has apologised to the family of the dead person, who was due to cremated on Wednesday. They said it wasn't unusual to leave bodies in the hearse, which was locked inside the building.
No arrests have yet been made
Posted by Sam at 9:22 PM