Worst criminal story of the week 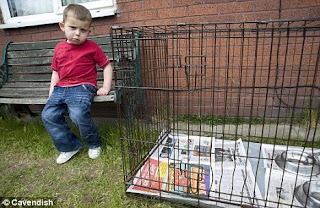 This is just reprehensible.

A mute boy who spoke for the first time after he was given a puppy for his fourth birthday has been shocked back into silence after it was stolen.

Two weeks after Milie the pug's arrival, Liam Hainsworth, who has a learning disability, uttered his first words, 'dog' and 'mummy', and became happier and calmer.

Just two months later, thieves snatched the pedigree from the family's back garden and the heartbroken little boy is back where he started.


Liam has refused to talk since losing his best friend on Monday last week and his tantrums have returned.

On Sunday, his worried mother gave him a replacement dog offered by a well-wisher. But she is returning the lhasa apso because Liam just 'pushes it away'.

Housewife Aimee Hainsworth, 24, said: 'Liam and Milie were inseparable and Liam is heartbroken now. He'll go over to Milie's cage and just beat on the bars.

'There's no words coming out but you just know he's screaming "Where is Milie? Where is she?" inside.

'Milie really was his best friend. They would play together happily for hours. None of his toys has ever held his short attention span that long, so this was incredible. Now he has just completely gone back into his shell.'

Liam suffers from global developmental delay, a condition which affects his ability to speak and move. As well as the speech problem, he has poor muscle tone and cannot walk far.

He also behaves like a child of two, putting things in his mouth and having violent tantrums.

But the pug's presence achieved more in days than months of speech therapy and physiotherapy had done.
Liam's grandfather, Thomas Hainsworth, saved up from his pension to buy the £900 dog in the hope it would help him. Mrs Hainsworth, from Bradford, said: 'Liam's eyes just lit up when he saw Milie. He was so happy. And the puppy was all giddy with the attention so it was lovely to see.

'The companionship transformed him, and within two weeks he had said his first words and was working on "dad".

'Just last week his teachers and I were saying how much Milie had helped him. Now this happens.' The dog was snatched from their garden on Monday last week.

Mrs Hainsworth, who is estranged from Liam's father, is considering buying another pug in the hope Liam will accept it.

Maureen Hennis, of the Pets As Therapy charity, said she had seen many cases in which dogs help with speech problems.

'People will talk to a dog where they wouldn't talk to another human being,' she added. 'A dog is non-judgmental and doesn't care if words come out wrong.'
Posted by Sam at 7:43 AM