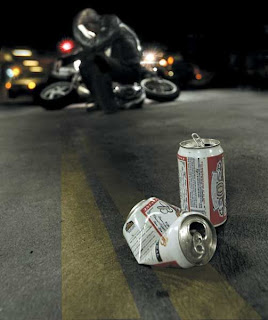 Drinking and driving is stupid.

Drinking and riding a motorcycle is el muy mondo stupido.

He's lucky to be alive.


A man suspected of drunken driving seriously injured himself early Sunday morning, when he crashed into an SUV downtown.

The man, whose name has not been released because he has not been charged, told San Antonio police he'd been drinking before he crashed his motorcycle into the side of an SUV stopped at a light in the 1100 block of East Commerce Street around 2 a.m.

Police believe the man, 46, was speeding when he struck a curb, lost control of the motorcycle and crashed into the SUV. Two people in the SUV weren't injured, police said.