Please keep her away from bridges 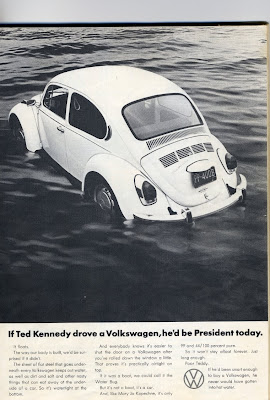 
The wife of Robert F. Kennedy Jr. pleaded not guilty Thursday to a drunken-driving charge and will be evaluated to see if she needs treatment for alcohol abuse.
Mary Richardson Kennedy, 50, was arraigned in Bedford Town Court, near her home 45 miles north of New York City. Her husband, son of Sen. Robert F. Kennedy and nephew of President John F. Kennedy, was not in court.
Mary Kennedy was arrested May 15 after a police officer reported seeing her drive her car over a curb outside a Bedford school. Police said she had a blood-alcohol level of 0.11 percent; the legal limit is 0.08 percent.
Kennedy had a dog in the car but no passengers. She was charged with driving while intoxicated.
Town Justice Kevin Quaranta suspended Kennedy's license, released her without bail and ordered an assessment by a private agency.
Kennedy's lawyer, Kerry Lawrence, said outside court that the assessment is "to determine if treatment is needed."
Lawrence said the judge would receive a report from the agency at Kennedy's next court appearance on July 15. He said he hoped the case would be resolved then.
The judge emphasized that he was treating Kennedy's case "like any other case." At the end of the session he said, "Ms. Kennedy, good luck to you."
Police said they had responded to Kennedy's home twice in the week before her arrest but no crimes had been committed.
Lt. Jeff Dickan said that in one call Kennedy reported a dispute between children. He said the other visit resulted in a state domestic incident report but there were "no crimes committed, no report of assault, no arrests and no need for follow-up."
Robert Kennedy, a prominent environmental lawyer, did not return telephone calls to his White Plains office.
Posted by Sam at 7:40 AM