Weeders of the world Unite! 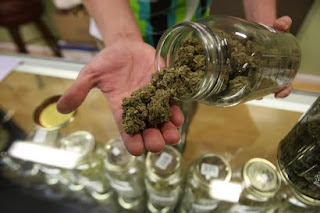 What would be a great name for this union?


It may well be the first union pot shop in the country, if not the world.
While it will help employees collectively bargain and resolve disputes with management, it also gives owner Richard Lee political allies with labor organizations.
Lee is responsible for the Tax Cannabis 2010 ballot measure, which would decriminalize recreational use of cannabis, which polls suggest has neatly divided California voters.

As legitimization of the multi-billion dollar business in marijuana could set the stage for a growth industry, one that UFCW is now in on the ground floor of. Which could help sway other growth-oriented unions like the Service Employees International Union.
Of course, police officer associations and the correctional officers union are unlikely to throw their support behind the ballot measure, since more drug arrests means more money and jobs for law enforcement and prisons.
It remains to be seen if the ballot measure will pick up a new string of labor endorsements, or whether it will pay off politically for the likes of Kaplan, who's running for Mayor of Oakland.
Posted by Sam at 3:34 PM