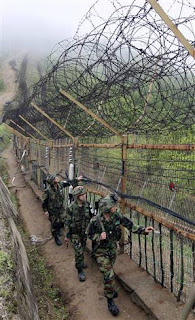 This is the last thing anyone wants or needs.
U.S. military told to get ready in Korea standoff
Obama orders commanders to prepare 'to deter future aggression'
msnbc.com
WASHINGTON - The White House said Monday that President Barack Obama "fully supports" the South Korean president and his response to the torpedo attack by North Korea that sank a South Korean naval ship.


In a statement, the White House said Seoul can continue to count on the full backing of the United States and said U.S. military commanders had been told to work with their South Korean counterparts "to ensure readiness and to deter future aggression."

The administration said it endorsed President Lee Myung-bak's demand that "North Korea immediately apologize and punish those responsible for the attack, and, most importantly, stop its belligerent and threatening behavior."