The lunatic is running the asylum 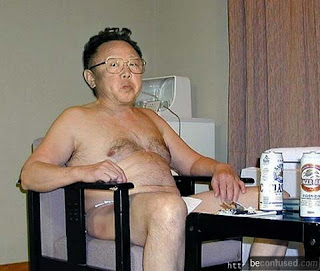 Okay so let me see if I understand this.


You sink a South Korean warship killing 46 sailors and if they do anything, any retaliation, including  sanctions, you will answer with all-out war?

Are you insane?  Oh wait, never-mind you're North Korea.

The asylum that pretends to be a country.

NKorea warns of war if punished for ship sinking
By JEAN H. LEE and HYUNG-JIN KIM

President Lee Myung-bak vowed "stern action" for the provocation following the release of long-awaited results from a multinational investigation into the March 26 sinking near the Koreas' tense maritime border. North Korea, reacting swiftly, called the results a fabrication, and warned that any retaliation would trigger war. It continued to deny involvement in the sinking of the warship Cheonan.

"If the (South Korean) enemies try to deal any retaliation or punishment, or if they try sanctions or a strike on us .... we will answer to this with all-out war," Col. Pak In Ho of North Korea's navy told broadcaster APTN in an exclusive interview in Pyongyang.