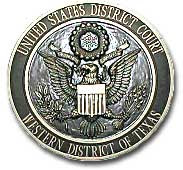 Congratulations Judge Biery on being selected as the Chief Judge for the Western District of Texas.

Bill Putnicki, court clerk for U.S. courts for the Western District of Texas, announced this week that Biery will succeed U.S. District Judge Walter Smith Jr. of Waco, who is ending his tenure as chief at the maximum of seven years.

The Western District has the largest caseload of the country's 94 federal districts, with 8,000 felony cases and 3,000 civil cases filed each year. The district also includes Austin, Del Rio, Alpine, Midland/Odessa and El Paso.