Boy that Judge sure unloaded on Lindsay Lohan, didn't she? 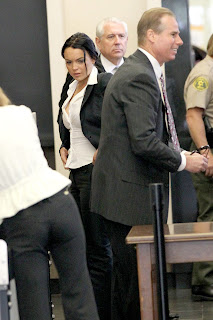 What a slap on the wrist, ouch!

I am confident she will screw even this up.

A Beverly Hills judge on Monday ordered actress Lindsay Lohan to wear an alcohol monitoring bracelet and submit to random drug testing after she failed to appear for a court date last week.

Lohan, 23, landed in hot water last Thursday after she missed a court date to address allegations that she had violated the terms of her probation from a 2007 drink drive case by skipping alcohol education classes.

Revel rejected calls by Lohan's lawyer Shawn Chapman Holley for the actress not to have to wear the alcohol monitoring bracelet and for her to be allowed to undergo drug testing in Texas, where she is working on a movie.

"She needs to submit to random drug testing here, not in Texas," Revel said. "It's no excuse to say 'I'm in Texas, so I can't show up.' Because then it's not random. So she's going to have delay that for now because it's going to prevent her from complying with the court order."

Revel said Lohan must also attend all her upcoming alcohol education classes and may only miss a session if it clashed with a random drug test.

Lohan, wearing a dark grey suit and open necked shirt, sat through the proceedings looking nervous throughout, occasionally frowning as her lawyer spoke with the judge.

The actress missed last week's hearing after being stranded in France, where she had attended the Cannes Film Festival. Lohan later alleged her passport had been stolen.
Posted by Sam at 1:40 PM