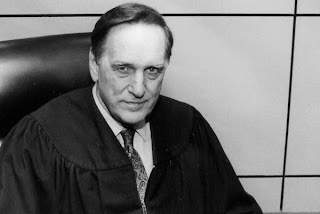 Judge Barlow was a good man and a good judge.

I'm proud that I was on the same bench as he was, the 186th District Court in Bexar County.  In fact he swore me in as the 3rd judge on that bench.  He was, of course, the first to occupy the bench in 1969.  The 2nd Judge was Terry McDonald and it is currently occupied by Judge Tessa Herr.

He always had interesting facts and stories to relate to us younger attorneys.

The former prosecutor graduated from St. Mary's School of Law in 1953 and served in the Texas House of Representatives in 1960 for one term. He was elected Bexar County district attorney and served in that post from 1963 to 1969.

Barlow authored the 2004 book, “Tales of the Southwest Courtroom,” which chronicled his life in the law.

Services are pending.
Posted by Sam at 7:00 AM