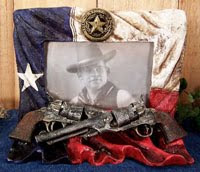 Because this is Texas.

AUSTIN — Tourists entering the Capitol on Friday — the first day of new security measures — thought metal detectors were a good idea until they found out people with concealed handgun permits aren't required to surrender their firearms at the door.

“It's OK. Keep the senators and the people working here safe,” Angel Descomps, 23, of Monterrey, Mexico, said moments after he passed through a metal detector.

But when he learned that people with licenses still can carry guns in the building, he said: “What's the point? So, why are you putting up metal detectors?”